The Lost Art Of The Apology 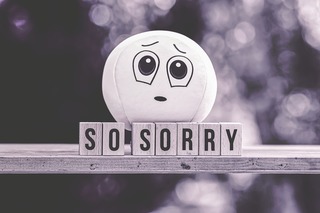 The Lost Art Of The Apology

Leadership Coaching is now available via Zoom with Mark Wager

During the past week we’ve seen several world Leaders apologise for their mistakes or at least attempt to apologise. Firstly, there was the Prime Mister of the United Kingdom, Boris Johnson, who apologised to the Queen for the all night parties held at Downing Street the night prior to the funeral of her husband Prince Philip while in the United States President Joe Biden apologised to a reporter that he was caught on his microphone insulting. Both world Leaders made mistakes, but the way in which they apologised didn’t resolve the situation, in fact it actually attracted more criticism. This made me wonder if people have lost the art of the apology.

The true cost of an unrepentant apology.

Everyone makes mistakes, no matter how hard you work or how much time you spend preparing, mistakes will happen and in business the cost can be immense. Having an unhappy customer means you won’t just lose their business but also the business of anyone your customer shares their dissatisfaction with. Did  you know that an unhappy customer is ten times more likely to share their experiences than a happy customer? Now,  just imagine the impact on your career if you make mistakes that upset your work colleagues, yet the outcome can be very different. If handled correctly, an effective apology will actually strengthen a relationship, build trust and establish loyalty but only if the apology is authentic.

It takes courage to apologise

“One who is truly confident is able to apologise.” – Olivia Tsoutsoplides

The most powerful words any Leader can use are “thank you” and “I’m sorry” yet too many Leaders lack the courage to overcome their ego and instead pass the blame on to someone else or hide behind the belief that the intention behind the mistake was a good one. The reality is that regardless of intent, if a mistake has caused harm to someone else then an apology is required. It’s  the right thing to do and a Leader should always do what is right.

An apology is more than “sorry”

“Apologising does not always mean you’re wrong and the other person is right. It just means you value your relationship more than your ego.“ - Mike Matthews

A common mistake I see many Leaders make now especially in the business world is that they seek to think that just saying “sorry” is enough when on its own the word is just empty. A true apology consists of three main elements. Ownership , acknowledgment of impact and recompense. When you step forward and take ownership of the situation and the individual you are talking to knows that you understand the severity of the situation and you are willing to take the necessary action to make amends then you are going beyond the word “sorry” and taking action that will strengthen relationships rather than destroy them.

“If an apology is followed by an excuse or a reason, it means they are going to commit the same mistake again they just apologised for.” - Amit Kalantri

When a Leader fails to take ownership and blames someone else or circumstances then they achieve nothing except coming across as weak. Everyone makes mistakes and I believe the majority of people understand this and are willing to forgive if they believe there is genuine remorse, yet remorse can only occur when the Leader takes ownership of the situation. If you look at the United Kingdom and Boris Johnson’s situation, at each opportunity he has blamed other people with the latest example being - no one told him that he was attending a party. He may think that he’s saving himself but all he has done is expose himself to national and international ridicule.

“The most important trip you may take in life is meeting people halfway.” - Henry Boye

Have you ever apologised to someone only to find that they keep on raising the issue long after the apology? If  so then it’s most likely because you have missed the “impact” stage of the apology. This stage is to understand the impact of your actions on other people and once understood, being able to articulate that impact, the result being that it helps heal any emotional damage and establishes a mutual understanding, a sound foundation for a continued business relationship.

The final stage of an apology is action. It  may be action that ensures the mistake never occurs again or compensation for the mistake. Either  way,  remember that actions are far more powerful than words. The focus of your actions should not be in the past instead focussing on what needs to happen moving forward in order to ensure a more mutually prosperous business future.

During my career I’ve made many mistakes and I’ve worked with people and companies who have also made mistakes but the ones that I still deal with today are the ones who want to make a genuine apology, those  with the intent to save a relationship rather than to protect their own embarrassment. Learn the art of the apology and while hopefully you never have to use it but if you do then you will have an opportunity to win back a colleague’s respect, or a customer  and his future business.