Interview with Mike Hesson, Head Coach of The Black Caps 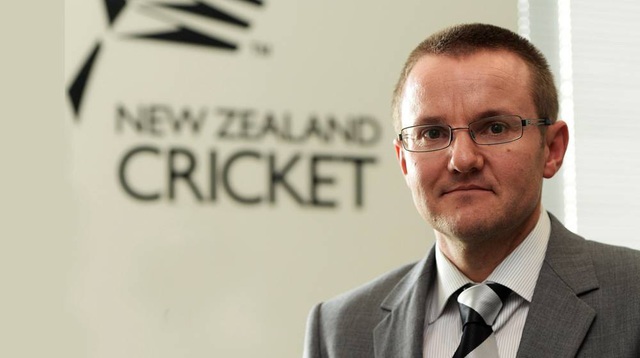 This is the first in a series of articles in which I sit down and interview some of the most prominent leaders in New Zealand's sport. I want to see how important leadership is in sports and if the principles of sports leadership can be successfully applied within other organisations.

Recently I had the opportunity to visit the head office of New Zealand Cricket. Entering through the doors the first thing you see is the trophy cabinet right next to the reception. The interesting thing about the trophy cabinet is upon closer inspection it's filled with trophies that have been won within the past few years. In a country that is known for the success of the All Blacks rugby team it's easy to overlook the remarkable success that New Zealand Cricket has achieved and especially since Mike Hesson has become Head Coach.

I sat down with Mike Hesson to get his views on leadership.

(Mark Wager) Thank you for taking time out from your busy schedule to talk to me. Lets start by discussing what your definition of leadership is?

(Mike Hesson) Firstly, it’s the way you frame up how the team operates. As a leader you need to set those boundaries those definitions about how you want to do things around here and then put criteria in place. And be clear what their role is and how they fit.
I see my role as defining how we go about things and breaking it down so that everyone in the organisation knows how they fit in, what their role is and how they will be judged.
(Mark Wager) In your relatively short spell as Head Coach of the black caps you have already seen victories in away test series over traditionally stronger opponents such as The West Indies in the Caribbean and India. How much of this success do you put down to the quality of leadership in your team?

(Mike Hesson) It’s a combination of things. The team now is very clear of those expectations, sure I’ve helped lead that but we have also developed a leadership group. That involves leadership from the support staff also having a player leadership group and if they are driving it that’s far more likely to have some success and we now have a very good playing group that drive the group and ultimately if I’m doing my job properly I’m just tweaking here and there. A lot of the work takes place by the playing group.

(Mark Wager) What role does the leadership play in setting the expectations in behaviour
(Mike Hesson) They do but we are slightly different. I’ve been through teams that have reams of paper that sets how we do things around here, roles and expectations but I’ve gone away from that. I prefer, this is what we are trying to achieve here’s a few basics standards of behaviour and expectations, the rest of it to be fair is common sense. Are you working in the best interest of the team yes or no? If you are its simple carry on doing it. If it’s no we need to have a discussion about that. I find the more you write down and the more opportunities you have to sneak around the edges, I’ve been through that, and I don’t think it works. I think if you have genuine buy-in from the group they know what’s right and wrong.
(Mark Wager) What qualities did you see in your Captain Brendan McCullum that make him such an effective leader?
(Mike Hesson) He’s very consistent in his approach, he is quite a charismatic character but he’s also really consistent every day he doesn’t have highs and lows. I think within a leadership group you have got to have people that are really consistent as players. They go through a lot of emotions and stresses and when they look at leaders within a group they have got to know that they are under control

(Mark Wager) You mean emotionally?
(Mike Hesson) Emotionally I think when a decision is made they look at Brendan on the park. That‘s a good trait. You are clearly a leader when people look to you for direction. It’s his actions, he speaks well and he’s very engaging so I think our leadership group works well because he does work a lot a lot with the players. It’s not an authoritarian style. I think that’s important in our sport.
(Mark Wager) What is the single most important factor in getting your team behind you?

(Mike Hesson) I think giving clear direction. I think if you are able to sell a vision then people will follow and I think secondary to that, players need to have a voice. I think that’s important in sound leadership.

(Mark Wager) The England and Wales cricket board have gone on record about how they use behavioural preference tools such as the Myers-Briggs Type Indicator(MBTI) In order to develop an individuals understanding of themselves and their colleagues. What methods do you employ to get the same results?

(Mike Hesson) There are a lot of different tools you can use. Whenever you build a team there are a variety of personalities and one of the things that we do is select on character. How they fit within a group. Character can be defined in many ways but fundamentally you have to be a good person and be able to buy into a team first culture. And when you have those types of people you can work out where they fit. But we also have players that enter our group at 19/20 and some of them leave at 35. Sure some of those character traits stay the same but also they can be manoeuvred through the environment they are in. When they arrive at 19 they might be unsure of who they are. They could change over time.
We gather a profile on players through experience with their major associations, with New Zealand A and other teams. We gather a lot of information from different staff so we build up a picture of the players from a playing point of view and a personality point of view. We don’t select on personality. The beauty of cricket is that we a have a variety of people and every team I’ve coached I’ve had the pleasure of having some interesting people. We don’t want clones and that individuality is encouraged.
(Mark Wager) Do you believe that the principles that make a successful cricket side can be used in other industries outside of sports?

(Mike Hesson) I think so. We are trying to win games of cricket but we are following a clear method in terms of getting the best out of a large group of individuals and working with them so whether we are selling bread or whatever it is we are able to apply the same principles and get people the right seat on the bus. Buying into what they can do, and understand their role and get satisfaction from what they do.

(Mark Wager) What leadership books can you recommend?

(Mike Hesson) I’ve enjoyed Outliers: The story of success by Malcolm Gladwell. We understand the principle of how to become an expert but the principle of hard work can’t be underestimated. Talent will only take you so far. So appreciating that there are exceptions to that, the rough diamond principle. They just need to have that trait to work hard as well.

Mark Wager is a Leadership Coach who specialises in providing Managers with the people skills they need in order to motivate and inspire their team. To book a coaching session or Leadership Workshop use the enquiry form below.

If you like this article check out the new book by Mark Wager. The Elite Guide to Leadership is available at Amazon for $2.99USD

Mark Wager will be facilitating some upcoming leadership workshops. Click below for more details