Why Now Is Not The Time To Quit 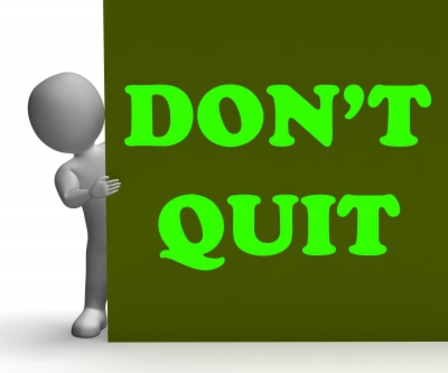 Why Now Is Not The Time The Give Up

If you are the kind of person who has taken the decision to follow your dreams then you have already shown the type of courage that many people haven't. If you are chasing your dream and your dream continues to be just out of your reach then you are in the majority. In business 90% of new companies fail within the five years. The reality of life is that to achieve any level of success in life is difficult and the odds are against you but this is not a reason to quit, even though the odds are greatly staked against you this is not the time to quit because if you truly want to reach your dream then you need to find more courage to continue down the path you have chosen.

The business world is a tough world and you will face obstacles, many obstacles and in fact you will consider quitting but the difference between the people who succeed in business and the people who fail in business is that successful people view these obstacles as feedback not as a signal to quit. Every obstacle provides you with feedback and opportunity, valuable lessons for you to know what you are doing wrong and an opportunity to correct that path.

In the business world there are many examples of businessmen who have had to overcome the odds and if any of these people didn't find the courage not to quit in the face of obstacles, the world would be a very different place.

Richard Branson is one of the world’s most famous and successful businessmen and his business career is perceived as a great success with Virgin records and Virgin airways and are both recognised as worldwide brands yet Richard Branson has also suffered some high profile failures with his forays in the soft drinks industry with Virgin Cola and the spirits industry with Virgin Vodka being complete failures, but he always found the courage to continue.

Thomas Edison was a prolific inventor with over 1,000 patents registered in his name. There were twenty two inventors who had made various versions of an electric lightbulb but everyone encountered the problem that the light wouldn't last long, it was only Thomas Edison that found the solution and even then it was reported that Edison failed 10,000 different alternatives before he found the solution.

"All our dreams can come true, if we have the courage to pursue them." - Walt Disney

Disney is today one of the world's most valuable brands worth over $169 billion yet today's reality is far from the founder Walt Disney's early days. He was fired by a newspaper editor because "he lacked imagination and had no good ideas" even after that rocky start he continued to encounter many obstacles including failed businesses and even bankruptcy yet he continued until he found success.

The world today has many things that we accept for granted, we have electric lights in our house, we drive in our cars to work and where would we be without our iPhone and iPads yet all these items that we consider vital to our life is because somebody decided not to quit, instead when faced with obstacles they saw these obstacles as gifts and they took them lessons that these gifts presented and created something remarkable.

The question you need to ask yourself is not whether you should quit but instead, what lessons are you learning and what you need to change in order to succeed. Then maybe, just maybe you can leave a legacy yourself that will change the lives of others.