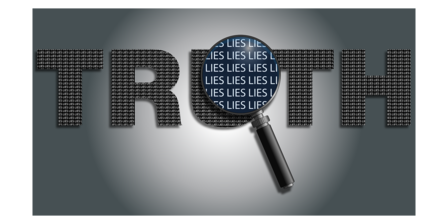 During the past week the world has been shocked by the events in the United States where a deadly riot took place in the Halls of Congress and while the political situation in America is a complicated situation and would require more time to explore than this article would allow there’s no doubt that the disgusting actions last week occurred because of one reason, there was a Leader who refused to tell the truth. What we witnessed was an extreme example of what happens when a Leader abandons the truth in favour of a lie and it provides a reminder to all of us to ask ourselves  why it’s so important  to tell the truth.

We all like to consider ourselves honest yet we have to admit that we also have a tendency to lie, maybe not major  lies but little white lies, the kind of lie that protects people or ourselves. We may tell someone they haven’t put on weight over Christmas when it’s obvious they have or we may tell someone we already have plans instead of telling them we don’t want to meet them. These little lies happen every day all around the world yet when you  are a Leader there’s no place for lies of any kind. There’s  no room for ambiguity. If  you  are a Leader you need to tell the truth and here’s why.

What you say matters

If you are a Leader, regardless of what level you find yourself at within an organisation you must never forget that what you say matters. People look towards their Leader for directions and answers so everything they say has consequences. This can be particularly challenging for new Leaders especially ones that have been promoted from within because people react differently to what you say when they are a co-worker compared to what you say when you are their leader.

When someone makes a mistake it can feel awkward to approach them. You tell yourself that talking to them will only make matters worse, you tell yourself that the problem will sort itself out and finally you convince yourself that you are being nice by not approaching the issue yet the reality is that you are being many things but nice is not one of them. I’ve never met anyone who goes to work to do a bad job and everyone makes mistakes yet the only way people learn is when people tell them the truth of their errors

I remember talking to a Manager who had several shops, one of which was losing money and was in danger of closing yet the Manager decided not to tell the staff the truth about the situation and instead of telling them that the shop was in trouble and sales had to increase he remained quiet and his silence continued until the day  the “for sale” sign was placed outside the shop. He told people that he kept the truth away from people because he didn’t want to demotivate people yet by doing so he lost the most valuables commodity a Leader has, he lost their trust not just with one shop but with all employees

We’ve all been in the situation when we’ve heard something about ourselves that was true but we wished it wasn’t. The  realisation at the beginning hurts but after a while we come to terms with the reality of the moment and we move on stronger than before wondering why people didn’t tell us sooner. To tell the truth requires two qualities, courage and respect. Leader needs to have the courage to see the truth and need to respect people enough to share the truth with them. Truth may not be what people want to hear but it’s what people need to hear and it’s the Leaders duty to provide them with what they need.

The truth helps the team achieve their goals

The number one reason why people don’t achieve their goals is that they don't fully understand what is required from achieving those goals and how far away they are from being able to meet those requirements. Too often I hear people being told they didn’t get the job they wanted because they were unlucky when the truth is they just weren’t good enough. By not knowing the truth people stay in this false world of not knowing what to do in order to fulfil their potential. Success requires people to be aware of the reality of their strengths and weaknesses and reality requires truth. It may seem painful but it’s truth that sets people free.

It’s not easy to tell the truth but no one ever said Leadership was easy. We require Leaders to show us the way ahead, the path towards success but we need to realise that the same path is seldom the easiest path. Success requires us to deal with difficult situations, to face the reality of our failings and above all to be honest with others and ourselves.