The Most Important Quality Of Effective Leaders

The Most Important Quality Of Effective Leaders

For a leader to be successful they have to possess many qualities . They have to be competent in what they do, they have to be courageous, they need to be able to delegate tasks, they need to be able to motivate people as well as being a visionary but there is one quality that has been established as being more important than others. This quality once mastered will have the single most impact on the leader's team in terms of motivation, performance and productivity. It's the leader's ability to instil belief in their followers that they are better than they believed they were.

Robert Rosenthal was the Chairman of the Psychology Department at Harvard University and as part of his research he visited a school and told the teachers that as a result of some new Harvard tests some of the teacher's students had been identified as having enhanced learning capabilities which meant that these students would make a significant jump in their learning ability within the next year. The teachers were told not to tell the students that they had been identified as having an enhanced learning capability. Robert Rosenthal then went back at the end of the year and the results were remarkable. These identified students performed better academically across a range of subjects and their IQ increased when tested. IQ stands for intelligence quotient and is meant to be an indicator of intelligence. You may think that these results were not remarkable as the best performing students were already identified at the start of the year but what makes this rears half so remarkable is that there was no test done for enhanced learning capability. It's was made up.

The teacher was unaware that the students who performed so well were just randomly selected at the start of the year. What happened was that the teacher had higher expectations for certain students and as a result of those expectations those students performed better, forming a self fulfilled prophecy.

This research has been replicated many times in schools and most importantly in workplaces where supervisors were told of potential high performers and those people performed better over time, absenteeism went down, turnover went down and productivity went up significantly. As expectations rose so did the performance. In leadership psychology this is known as the Pygmalion effect. The effect is named after the Greek myth of Pygmalion, a sculptor who fell in love with a statue he had carved. The Pygmalion effect is when higher expectations lead to an increase in performance. It also works the other way, when expectations are low then performance will decrease, this is known as the Golem effect and both are forms of self-fulfilling prophecies. In simple terms a person's performance level will match the expectation of their performance.

Belief is a self-fulfilling prophecy

This research shows that the expectations that the leader has of their team has a significant impact on the performance of the team. If the leader expects the team to perform poorly then that comes across in the leader's interactions and the team and the individuals within the team are more likely to perform poorly yet if expectations are high the opposite effect will happen and the team is considerably more likely to reach high levels of performance. This is not just research as I have many practical examples over the years of working with companies of different sizes from different organisations and countries. Time and time again I've seen people perform to the level of expectation that others have of them. The best leaders are the ones who can raise that expectation of performance and make people believe they can perform better at a task when thought possible.

Imagine a time in the workplace when you performed baldly, you made mistakes and you didn't enjoy your role and then think of a time when the opposite was true when you performed well and did great work. In both circumstances compare how the leader treated you and in the majority of circumstances if not all, you will remember that in the high performing role you had a leader that believed in you.

Opportunities can be found in the potential of others

So when a leader is asked to look for ways to increase productivity or to increase profits the best and most reliable place to look is within the potential of the followers. If they can find that potential and make the follower believe that they can do more then they will achieve more, productivity will increase and the profits will follow. Many people focus on the follower's belief in their leader yet a more important focus is whether the leader believes in their followers because that quality is in itself the most important quality an effective leader can possess. 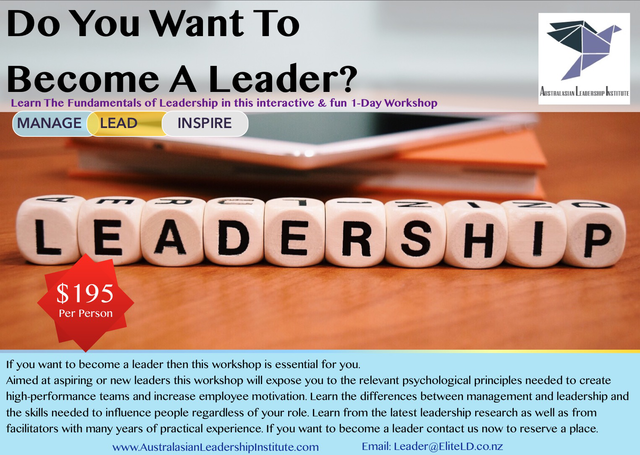