The 6 Steps To Effective Delegation 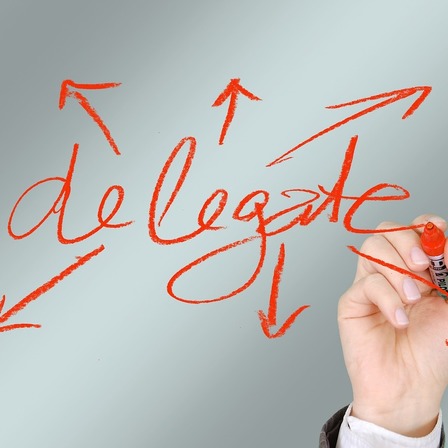 The Six Steps To Effective Delegation

“I know I should delegate but it’s easier if I do it myself.”

Delegation is one of the main challenges for new Managers, especially those who have a lot of technical expertise in their industry. This is without doubt, one of the statements that I will hear whenever I talk to a Manager who’s been in their role around eighteen months or less. It is a challenge that if not overcome can lead to large amounts of workload for the Manager which leads to working longer hours, increased stress and ultimately becoming miserable in a role that they should be enjoying. In this weeks article I want to share with you the steps you need to take in order to delegate work effectively.

The first thing you need to ask yourself is who should be doing the work and by this I don’t mean who can do the work most effectively because it’s usually the Manager or the most experienced. The real question is who is the most appropriate person to do the work? When you look at the task in-front of you whose role is it to complete that task? There may be times that the person in question is incredibly busy so someone else needs to help out. So  if you are telling yourself it’s easier to do the work yourself then ask yourself what work are you saying no to in order to say yes to this work. An effective team needs to have people who have clearly defined roles and they need to be encouraged and supported in order to perform the tasks that fall within their roles.

The secret of delegation.

Before I go in and tell you the next steps I just want to share with you something else that I hear a lot from Managers” “ I asked someone to do something and they didn’t do it” to which I then ask what did they do afterwards and the answer is always the same. “I then did it myself.” It's human nature to take the easiest path. If  you know someone else will do a task if you won’t do it then why would you do it? The secret of delegation is to make it easier to perform a task. It is not to perform the task yourself. You won't need to delegate if you are successful at removing the most common excuses which are:

I didn’t know what to do.

I don’t know why it was so important.

I didn’t know when the task had to be completed by (I was just about to do it).

I didn’t know how to do it.

If you cover all of these common excuses then the only one left is “I don’t want to do it.” People are incredibly reluctant to say that because they know what the consequences are. So  you find that the tasks are completed without your intervention - this is the secret of delegation.

Once you have identified who is the most appropriate person is to perform the task, you will need to explain what the task is. Remember what is obvious to one person is not obvious to another and if they don’t share your expertise then make sure you simplify the task so that they understand the specifics of what needs to be done. Ask yourself have you explained what a great job looks like? If you haven’t explained this then you cannot  expect anyone to do a great job.

Managers create work while leaders create meaning. People are more likely to do things when they understand the importance of the task. People  often forget what day it is but they rarely forget their anniversary because even though it’s just another day that day has more meaning so attracts more attention and focus. The greater the meaning the greater the focus. When delegating, make sure you explain why the task has to be completed and how it fits within the larger picture. No task is trivial. It's  just part of a much larger task

The next step is to explain when the task has to be completed by. The date and if necessary the time. Don’t assume people know because if you do then you will start hearing the phrase “it was next in my list, I was just about to do it when you reminded me” It’s your responsibility to ensure people have full knowledge of deadlines and don’t leave it to the last minute. Give yourself some spare time to allow for unexpected delays so if you need something by 4:00pm ask for it to be done by 2:00pm.

Delegation is a shared effort

This  is the crucial step that many Managers don’t do well. It's explaining how the task is meant to be completed and the key is that this needs to be done by the employee rather than the Manager. Let me explain. A lot of people ask the same question when they delegate a task which is “do you understand?” This is one of the most ineffective questions a Manager can ask because people will either say yes because they think they understand and it’s only when they make a mistake that they realise they didn’t or they say yes because they don’t want to look bad, either way this question doesn’t help.

In order to delegate a task, you need to ask a question  the answer to which provides you  confidence that the task will be completed to the standard you want and the answer is never “yes.” It's  a demonstration of competence. The question will vary from task to task but consider asking how they plan to  get this done,  or if you know there’s going to be challenges then ask how they plan to overcome these challenges. If  the answer is silence or “I don’t know,” then you know the task is not going to be completed and more importantly you have found out early so you can fix it before it becomes a problem. The focus has to be on the employee to answer the how but you can still offer advice and suggestions.

The last step is to follow up the task making sure it's on track to be done on time and again this needs to be the responsibility of the employee. If you find yourself in the position where you are constantly reminding people of deadlines and you are spending a lot of time chasing people up then you have stopped being the teams Manager and you have become their mother.

Once you have delegated the task, make sure that the employee is aware that it’s their responsibility to let you know if at any stage they believe they are not going to complete the task by the deadline. You might also ask the employee to provide you with an update on the task prior to the deadline so for example if they have to produce a report by 4:00pm Friday then they also have to send you an update on Wednesday letting you know what stage they are at. It is important that  the employee is made responsible to provide updates and it’s not you who is following up, you are not the teams mother or their personal assistant  so don’t act like one.

Remember being a Leader is like being a conductor of an orchestra. Your role is not to play all the instruments instead it’s to show people what to play and when. Each instrument is important and has its own unique sound but it’s the conductor that brings all the sounds together into a cohesive piece of music. Follow the steps above and you will find yourself conducting your team towards a successful future.