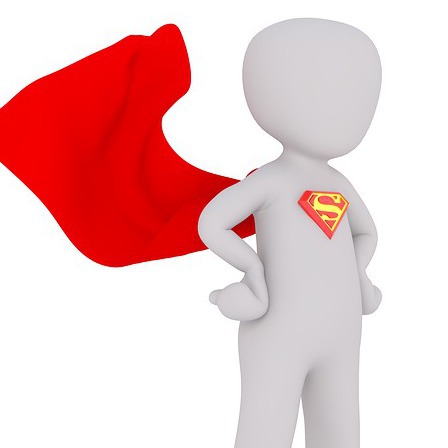 Since his first appearance in June 1938 Superman has been one of fictions most iconic characters. Even if you have never read a Superman comic or seen a Superman movie you still will be fully aware of the imagery of the red cape and the S symbol on the chest. In fact the Superman symbol is among the top five most recognised symbols of all time. Its rare that a fictional symbol transcends it's art form and becomes part of popular culture but Superman is one of those rare cases. His lasting appeal can be attributed to many things, an appeal to every child's desire to fly, an adult's need to be special or maybe we just want to cheer for a hero. The story of Superman is an inspirational one and contains many useful lessons which can help us become better leaders in our own lives.

It's all about hope

If you wanted to break down the story of Superman down to a single word it would be hope. Superman has inspired generations not because of his powers, there are several characters with superpowers. Superman's inspiration comes from his belief in hope. He believes in the good in people he believes that if you show people the way, give them an example then people will follow, in essence this is the fundamental quality of leadership. We don't need leaders to tell us what to do or how to do it. The  reason we need leaders is to show us what we are capable of, what kind of person we can become and that is what makes leaders like Superman inspirational.

Humanity is based on actions and not birthright

There are many qualities that followers seek to find in their leaders and the most popular always relate to their humanity, their ability to put the needs of others ahead of their own, their commitment  to truth and justice and while we often assume that we are either born with these qualities or are leading to the natural born leader theory the reality is quite different. We chose the kind of person we are, our birthplace, our upbringing, our education are all significant factors but the end decision is ours. Superman is often viewed as one of the most human of characters is not even human, born on a now dead planet it's the decisions he makes, his commitment to help others that makes him so special.

True leaders are created by their followers

Superman is the leader of the Justice League, a collection of the greatest superheroes in the DC Comics universe and includes such characters as Wonder Woman, Batman, the Flash and Green Lantern. Superman is the leader of heroes. Leadership is more than a title, companies can bestow the title of leader to people and pay people money to be their followers but true leaders can only be created by followers. True leaders are created when people have faith and trust in someone to such a degree that they decide to follow them. If you want to become a leader of your own Justice League then like Superman you need to become the type of person that you would want to follow yourself not because you are paid or told to but you follow because you want to.

Leadership is never about you

One of the most important things I have ever learnt as a leader was to always remember that leadership is never about you, I stated above that leaders are created by followers which also means that followers can destroy leaders as well. If people lose trust and faith in their leader then the leader is no longer leading, leadership is always about the followers and never about the leader. Leadership is power, it's an honour rather than a title and needs to be treated as such. Superman has the power to do anything he wants but he recognises that his power and the position he is in is an honour and therefore focuses on the need of others rather than his own personal needs.

Superman battles intergalactic super villains who have the power the destroy the world yet while a lot of his time is spent on saving mankind, some of the most iconic images are of Superman saving a cat out of a tree. Leadership requires you to focus on the big picture, the strategy and direction of the team yet you should never forget the small details, it's the small things that are important to people and should never be underestimated. When I talk to followers and ask them what do they like about their leader,  it's often that it's the small details that are mentioned. The leader who knows the name of all their staff, who address the small jobs that are not going to have a big impact on the company but are important to individuals. So like Superman don't just save the world but rescue the cat as well.

We may never have the power of Superman, but each of us has the power to lead, to inspire, to make a difference and in many ways that is just as heroic.