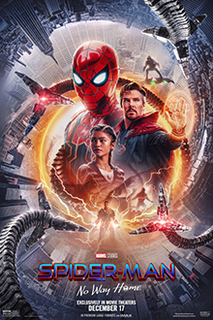 One of the most iconic characters in all fiction is Spider-man. Created by Steve Ditko and Stan Lee for Marvel Comics, the story of Peter Parker, who gains superhuman abilities after being bitten by a radioactive spider, has fascinated generation after generation and even today nearly sixty years after his first appearance, a new movie “Spider-man: No way home,”is about to be released and is expected to be the next  biggest movie of the year, projected to earn $135 million to $185 million in its first weekend of release.

So in a sea of superheroes, what makes Spider-Man so special and what does this have to do with Leadership? In this weeks article I want to explore the story of Spider-man, it’s enduring popularity and the lessons that can help everyone become a superhero leader.

Leadership Lesson 1: Its not the title, it’s the person that counts.

One of the enduring aspects of the tale of spider-man is that the story isn’t about spider-man it’s about Peter Parker, the man behind the mask. It’s not his superpowers that saves the day it’s his qualities as a person that makes a difference. Peter Parker is a good person who is trying to make a difference. It just happens that he has to wear a mask to do so.

As a Leader, you need to remember that it’s not your title that makes you a Leader. A job title can make you a Manager but if you want to be a Leader then people need to choose to follow you so unless you are the type of person that others will admire and look up to, then you will always struggle to win your team’s respect. Just like a hero behind his mask, you need to remember it’s the person and not the job title that people are interested in.

Today, Marvel studios is one of the world’s most successful movie studios, with each movie released grossing on average $1 billion dollars yet just over twenty years ago the situation was very different. In 1999, Marvel comics was on the verge of bankruptcy and had to sell the rights to their most important characters in order to survive and the first character to be sold to Sony was Spider-man, their most popular and marketable character.

As a Leader you need to be constantly aware of your branding. If everyone you worked with was asked to describe you, what would they say? Would they say positive comments or negative ones? How highly are you rated? Are you popular especially with those who are making the key decisions and above all how valuable are you? Understanding your internal brand is vital, not only for your career path but also for leveraging your value so that you can obtain the necessary resources and support your team needs in order to succeed.

In the story of Spider-Man, Peter Parker didn’t intend to be a hero. His concerns were more about getting his home work done or impressing a girl in class, yet when his Uncle Ben died, he embraced his uncles words which were “with great power comes great responsibility” and understanding that even though he didn’t chose to be a hero it now became his duty to try to become one.

Companies select Managers yet its the people who decide who to follow. If you are someone who those around you respect, admire and look up to, then whether you want to or not, the truth is that you are now a leader, and what you say and do has consequences. The most effective leaders do not set out to lead but the circumstances they find themselves in provide them with an opportunity to make a difference.

Leadership Lesson 4: It’s okay not to take everything so seriously.

In the world of superheroes, Batman is known as being serious, Superman is known as  being noble, yet Spider-Man has always been known as the character that makes witty comments and jokes and even in the most serious moments, he doesn’t always take everything seriously. The humour of Spider-Man makes him more easy to relate to and likeable to the audience and this adds a level of emotional pathos to the story.

Now Leaders should not joke to the same degree as Spider-Man because that could become tiresome very quickly but there is a case for Leaders using humour in order to reduce stress in the workplace. Leaders need to understand how to manage the stress levels within the team, ensuring that it’s not too high that people get crushed or too low that people become complacent and humour, if applied appropriately, can be a great tool for this.

There are many stories about Spider-Man saving the world but he’s more commonly known as the friendly neighbourhood Spider-Man. While other heroes focus on the global and even intergalactic issues, the story of Spider-Man focuses on issues that are more relatable to the audience like struggling to find a job, falling in love for first time, dealing with a death of a loved one, the story of Spider-Man has always been more about the man rather than the spider.

No matter the size of your team, whether it’s hundreds of people or just a few, an effective leader understands that a successful team is all about its people. In order to lead people you need to know people and what is important to them, what challenges  they face not just at  work but also outside. No matter the size of the issues your organisation has to address, you should never forget that for your team it’s the small things that count. So, while work may seem all consuming don’t forget that a leader’s role should always be about the people.