Every Leadership role is difficult, as long as people are involved each with different personalities and motivations, leading people is never going to be easy. Yet the most difficult challenge a leader can face is when they are put in charge of an underperforming team, a team that has a history of failure and losing. If you as a leader are in this position don't be disheartened because you are in the lucky position to be able to make a huge difference to the team and to the lives of the individuals within the team. You just need to know how to turn a team of losers into a team of winners.

As a Leadership Coach I travel around the world working with organisations from all different industries dealing with this exact issue. It's a common problem with businesses everywhere having teams which have a record of not performing. This raises a question, if a team is in a rut, how do you turn it around?

Firstly, it's important to understand that when people are together, their interactions form what is called a "collective mentality" a kind of team personality. Expectations of behaviours are formed and these expectations are so strong that anyone new entering into that group will conform to those expectations in order to fit in. By way of example on a lower scale imagine what it felt like when you walked into a party that is incredibly quiet, how do you react? You tend to naturally become more quiet yet if you walked into a party that is loud and everyone is having fun, instantly your energy levels increase and before a word is said you are having a great time. This reaction is instinctual. As human beings we are pack animals. In order to survive we form groups so we are attracted to form partnerships and we are especially vulnerable to this when we are in environments that we feel are new and uncomfortable.

We've all seen when this collective mentality works well in many circumstances when teamwork beats a team of more talented individuals. The downside is when the collective mentality is a poor one it's difficult to turn around and it's not as easy as just replacing some staff members, it's far more than that. These are the techniques I encourage Managers to use to turn a team of losers into team of winners.

Break down the team

The first step is to break down the team, not break it up but break it down. You want to dilute the influence within the team and replace it with your influence as a leader. A key part of this is to criticise individuals for poor behaviours and praise collectively positive behaviours. This is different to how you would lead in normal circumstances but a poor collective mentality is not a (hopefully) normal circumstance and needs to be dealt with in a specific way. A common mistake is when you as a leader criticise the whole team for poor behaviour. This does nothing but reiterates the collective mentality. Isolate the poor behaviours and criticise the individuals for that behaviour and treat them as individuals and not as part of the team and when praise is due deliver it to the team as a whole. This is the first step of reprogramming the team.

There's been many studies, most noteworthy are the ones from the Harvard Business school on the impact that the leader's expectations have on team performance. It has been shown that the higher the expectation of the leader the higher the level of performance as long as the expectation is not too far beyond their maximum ability. The key is to raise expectations everywhere and not just the team's core duties. Improve the work environment, any services, the standard of dress no area is too small, each and every improvement just sends a message that standards are being raised and this will slowly impact the collective mentality and raise their standards in all areas of their work.

Every team needs a vision, something to believe in that is greater than the individuals and can only be achieved if everyone works together. It's time for you as the leader to be ambitious think about where you want your team to be and don't be restrained by current realities or the mountain of obstacles that will be in your way. Every obstacle can be overcome given the necessary resources and passion. You as the leader needs to ask yourself truthfully where do you want this team to be. If the teams instant reaction to the new vision is hesitation and a level of discomfort then you are on the right track. I've always described leadership as the ability to install power and belief in people in order for them to reach levels they never felt were imaginable. This is the type of leadership poor teams need.

The influence of a collective mentality can be incredibly strong but one thing that often is stronger is the needs of the individual. People will work hard for the team but will sweat blood and tears for themselves. The most successful leaders align the personal ambition of the individuals to the team's new vision and make people understand that they will achieve their personal ambition if the team achieves theirs. You as their leader need to meet with people on an individual basis and discover what makes them tick, what motivates them, what is their passion and what do they want out of life. At this stage keep the discussion away from the team and focus on the individual. Create the link between the individual and teams ambitions and you will be well on the way to creating a new team.

This can be the most significant stage if you have the resources to do so. The teams mentality doesn't change if you replace 51% of the team, if done correctly the overall mentality changes when approximately 20% of the team adopts new behaviours. This is what is called the "tipping point" whenever new ideas are introduced everyone on the team falls somewhere on the scale that is called the law of diffusion of innovation. Some are innovators, some are early adopters, some fall into the early majority category while others fall into the late majority and finally the laggards, who will only change when they are forced to. The key is to not only ensure that the new blood are going to be adopters of the desired new behaviours but they also possess the expertise and personal qualities that the other team members admire. In this way there will be greater influence on the team and the "tipping point" is reached much faster.

Every team goes through a bad patch of results. It's what you do during these times that determines your future and while none of us know what the future holds if you follow these leadership principles you will find that you have put your team on the path towards becoming winners. 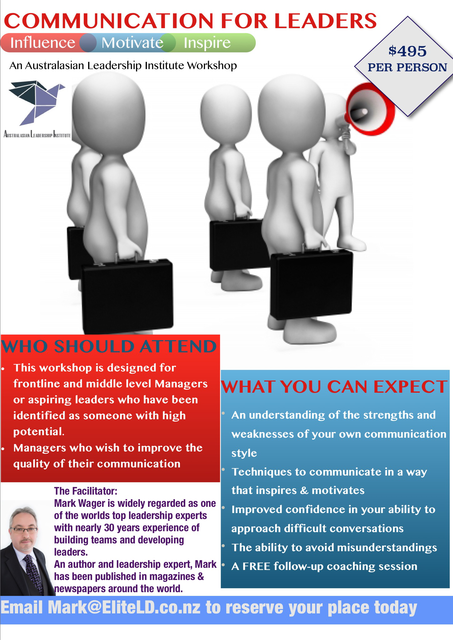