How To Start Saying No At Work 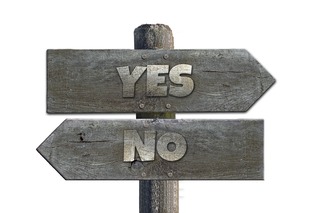 How To Start Saying No At Work

Last week I was training a new Leader with a common problem. Whenever  her Boss gave her more work she struggled to say “no” and as a result she now has way too much work on her desk so she’s working longer hours and she’s so stressed that she’s considering leaving - all because she didn’t feel comfortable saying “no”. This situation is so common that I thought I would cover the topic in this weeks article and help people to learn how to start saying no.

The challenge is that it’s only good workers who get given extra work to do. I’ve never been in a meeting in which a discussion was held about who should be given extra work and someone said “let’s give it to the laziest person on the office.” This never happens. It’s  always the hard worker who’s good at what they do that gets burdened with more and more work while less effective co-workers are in some way rewarded for not being as good and it’s all because people find it difficult to say “no.”

We are the sum of all our experiences and beliefs. Everything  we experience in life both good and bad makes us who we are today and influences how we react to certain situations. People who struggle to say no to things have commonly had positive experiences with being the go-to person and saying no has had negative connotations. It's been viewed as being disrespectful particularly when talking to someone more senior which has led to a fear of upsetting or disappointing people. While this is very commendable it can also encourage people to take advantage of them by not doing their own work because they know someone else will do the work.

The first piece of advice I give to Leaders who are struggling on how to say no is to stop saying that they don’t like saying no. The most important  leader we have is ourselves and what we tell ourselves is incredibly important so if we continue to tell outsides we are bad at something then that detrimentally impacts our performance. Just  imagine having a Boss that  tells you everyday that you are not good enough, how would that feel? Well that is exactly what you are doing when you tell yourself you are bad at saying no. Instead tell yourself the truth which is you don’t want to upset people. You will be surprised with what  a difference this will make. All significant change starts with changing the story you tell yourself.

The former Prime Minister of the United Kingdom, Tony Blair once said “The art of leadership is saying no. It’s very easy to say yes.” Leaders, especially the successful ones understand that they have to do what’s right and there will be times when doing the right thing is difficult. It's  easy to say yes but ask yourself is the easy life you have gained in the short term worth the difficult life you have made for yourself in the long term? If you know the difference between right and wrong then you know when is the right time to say no, you just need to stop hiding behind these excuses you have created for yourself and find your inner courage to stop saying yes, stop saying maybe when you want to say no.

When you are given a task you know you don’t have enough time to complete,   instead of saying “no” try explaining the consequences of what will happen if you take on this extra work. For e.g. “if I complete this new work then I won’t be able to complete the following…or it will be delayed by…” by explaining the consequences of the extra work it puts the responsibility back on the person giving you the work and it’s up to them to decide how important the task actually is. This won’t stop you getting all work but it will stop you receiving the work that really isn’t that urgent.

Mark Wager has limited availably to coach ambitious Leaders who wish to achieve a higher level of performance. If you are interested then you can contact Mark using the enquiry form below