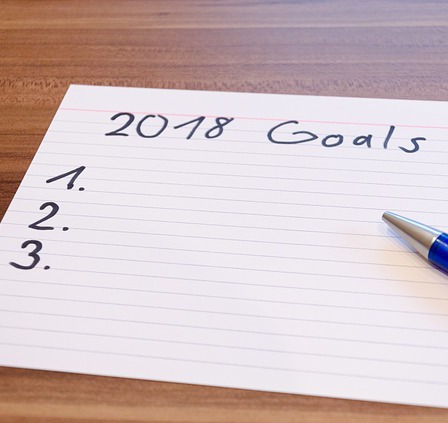 Every year millions of people around the world see the New Year as an opportunity to make positive changes to their lives. Whether it’s a desire to lose weight or to get a promotion at work, people welcome the New Year and the opportunities it brings, yet these resolutions are often empty promises that we make ourselves. On average only 8% of people will actually get to the end of next year with their resolution completed and the vast majority of around 80% will quit their resolution by the end of February. Why does this happen and how can we make sure that our new year resolution doesn’t become an empty promise and becomes a reality instead?

You can’t start a journey unless you know your destination.

The first step is to clearly define what you want to achieve. If your resolution is to lose weight or to gain extra money then to be honest you won’t succeed. If you want to be successful you need to have a clear definition of success. This definition needs to have such clarity that a complete stranger will know the exact moment you have achieved success. In order to be able to unlock this clarity you need to ask yourself two questions. “What and why.” What do you want to happen and why do you want it. If you can answer these questions it will lead you to the “how.” Now let’s look at this in more detail.

When people contact me in my capacity as a Leadership Coach to help them with their New Year Resolutions I ask them the two most important questions, what and why. This helps me and them understand if what they think they want is actually what they really want, because people focus so much on the what they very rarely ask why and it’s the why that clarifies the goal.

For example, if a New Year Resolution is to gain a promotion and the why is because you want to become happier then you need to question yourself if a promotion will truly make you happier. Studies have shown that a promotion is one of the most stressful times in life. Death of a loved one comes first, losing a job comes second, sickness third, moving house fourth and then promotion is the fifth. So if you believe a promotion will bring you happiness then you need to realise this may not be true and you would either need to find another reason to get promoted or look at another goal which is more likely to make you happy. This is why most resolutions fail. It’s because they realise the goal they have set themselves won’t deliver what they thought it would so they give up. Ask yourself what do you want and then why do you want it.

Once you have challenged your resolution by asking yourself what and why it’s time for the next stage and that is to challenge yourself again and ask yourself if you are dreaming big enough. Your goal needs to inspire you so much that you will carry on when others decide to give up. Hers a simple test. If  you tell someone your about your goal and they do not hear the passion in your voice and see the excitement in your face, then you need to lift your goal to a new level. If you are going to dream then you might as well dream big. If  you are going to lose weight then aim to lose a lot, if you want more money then aim for a lot of money. The sculptor Michelangelo once said that “The greater danger for most of us lies not in setting our aim too high and falling short, but in setting our aim too low and achieving our mark”

Surround yourself with winners

Have you ever been to a match and the stadium is packed? The atmosphere is electric and the crowd is getting behind the team, cheering them on to victory. We all know stories of teams who have come from behind to win and after the game, commented on the positive effect the crowd had on them. Its not just anecdotal, there are several studies that have shown the impact that the crowd can have on performance. This is why it’s so important who you associate with. Jim Rohn, the American entrepreneur once said “you are the average of the people who you spend most time with” The easiest way to be successful is to surround yourself with successful people, their attitude and habits will influence you, likewise if you surround yourself with people who fail then you are likely to fail yourself.

The last tip I will give you is that if you really want your New Year resolutions to work then don’t wait until January 1st or even until tomorrow. Start this very moment and no matter what your goal, you will find that time is your most valuable resource. So if you want a better life, start right now. Don’t wait for tomorrow or plan for later. Opportunities to become successful and achieve your goals may just pass you by.