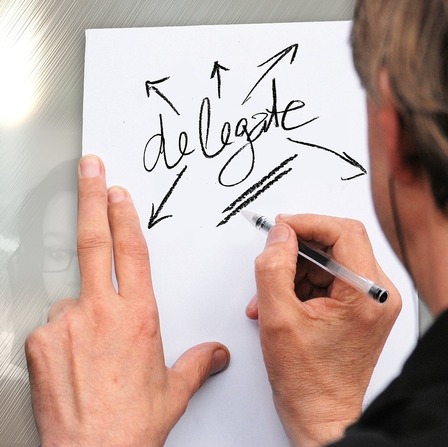 When you move into a managerial role for the first time, everything changes. As a Manager you are judged not only by what you do but also by what your team does. If your team is not doing the work required then no matter how hard or how many hours you work you will still fail as a Manager. There are many skills you need to learn about your new role but the most crucial one is the ability to delegate. You can’t do everyone’s job for them, you need your team and your team needs you so you need to learn how to delegate more effectively and in this weeks article that is exactly what I’m going to show you.

When you have a task that you require someone else to perform then here are the steps that you need to follow. If you do so then not only will you find yourself less stressed but your team will feel more empowered and everyone will make less mistakes.

The first step to effective delegation is to explain the “what.” The individual who you have asked to perform this task needs to understand what they have to do and by that I mean a full explanation. The challenge is that what is obvious to one person is not obvious to someone else and this is especially true when people who have very high technical skills. This is why you are required to explain a task because experts have a tendency to underestimate the complexity of a task which leads to poor communication and tasks not being completed to the standard required. Be specific and leave no room for misunderstanding, make sure the person who has the task has a full understanding of what they have to do and what success looks like. Ask yourself have you explained what a great job looks like? If you haven’t explained then how can you expect anyone to do a great job?

Managers create work while leaders create meaning. One of the most common reasons why people do not do what they are told is that they didn’t understand the importance of the task so you can greatly reduce the amount of issues you have as a Manager by taking the time to explain why the task has to be done. People are naturally more inclined to do a task and do it well if they believe it’s important so it’s your role to create the link between what you have asked someone to do and the overall goal of the team. Every task is like taking a step on a long journey and just how no step is trivial the same can be said about every task, no task is trivial. When the former President of the United States John F Kennedy first visited the space agency NASA he met a janitor and when the President asked him what he did the janitor replied “I’m here to put a man on the moon” even though he was doing work that others may see as trivial he knew why his work was so important.

Now this is the crucial step that many Managers don’t do well, it’s explaining how the task is going to be completed and the key is that this needs to be done by the employee rather than the Manager. Let me explain. A lot of people ask the same question when they delegate a task which is “do you understand?” This is one of the most ineffective questions a Manager can ask because people will either say yes because they think they understand and it’s only when they make a mistake that they realise they didn’t or they say yes because they don’t want to look bad, either way this question doesn’t help.

When delegating you need to ask a question that the answer provides you with confidence that the task will be completed to the standard you want and the answer is never “yes” it’s a demonstration of competence. The question will vary from task to task but consider asking “how will you get this done” or if you know there’s going to be challenges then ask how they are going to overcome these challenges. If  the answer is silence or “I don’t know” then you know the task is not going to be completed and importantly you have found out early so you can fix it before it becomes a problem. The focus has to be on the employee to answer the how but you can still offer advice and suggestions. Try this step and you will see a big difference in the quality of work.

The last step is to follow up that the task is in track to be done on time and again this needs to be the responsibility of the employee. If you find yourself in the position where you are constantly reminding people of deadlines and you are spending a lot of time chasing people up then you have stopped being the teams Manager and you have become their Mother. Once you have delegated the task make sure that the employee is aware that it’s their responsibility to let you know if at any stage they believe they are not going to complete the task by the deadline.

You might also ask the employee to provide you with an update on the task prior to the deadline so for example if they have to produce a report by 4:00pm Friday then they also have to send you an update on Wednesday letting you know what stage they are at. It is important that  the employee is made  responsible to provide updates and it’s not you who is following up, you are not the teams Mother or their secretary so don’t act like one.

You will never be able to do everything yourself so delegation is key to success. Remember it’s your responsibility to explain what needs to be done, why it’s important and when it needs to be done by and it’s the employees role to explain how they will get the task done and it’s their responsibility to update you on their progress. Follow these simple five steps and you will be amazed with the difference it makes to your workload.