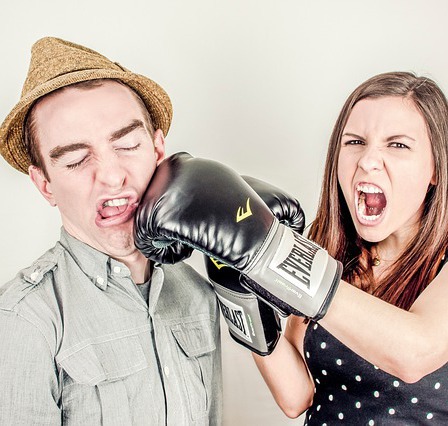 Conflict is costing companies millions of dollars every year. Every team has conflict and in many times it can be a positive factor but when conflict is unresolved it can lead to wasted time and energy, reduced decision making quality, good employees leave, taking with them their valuable skills and experience which takes money had time to replace, poor employees tend to stay and end up demoralised and a destructive influence in the team which leads to lost work tome and productivity. All of this costs you money.

A hospital in New England in the United States brought in outside analysts to determine what conflict costs them in one year. They discovered that they had over 200 conflicts which cost them a staggering $12,183,200 USD. Hopefully your company is not losing that kind of money but I guarantee that you are definitely losing money due to unresolved conflict but it doesn't have to be this way. There is a way to resolve conflict in the workplace and in this article I will explain how.

You can easily remember the skills and techniques you need to resolve conflict by remembering the word strife and what each letter stands for.

S is for Significance

A lot of workplace conflict occurs when an individual doesn't feel valued by either the company they work for or by their colleagues. Remember how someone is valued is not always measured in money it is more commonly measured in how much respect is given to the individual so when you engage in trying to resolve workplace conflict make sure you value everyone's positions regardless of whether you personally agree with them or not. What may not be important to you may well be highly significant to others.

T is for Timing

When dealing with conflict you need to be aware of what is the right time and where is the right place to resolve this conflict. Sometimes taking time out before resolving conflict can be highly valuable and it allows emotions to settle down both for the parties involved and for yourself, if you are angry or overly emotional then you greatly reduce your chances of getting the right outcome. Choose the location for the resolution unless the matter is an emergency situation do not attend to resolve conflict in public, find an office or consider going outside to find a neutral place for the discussion.

R is for Reality

What people think the conflict is may not be what the conflict actually is. There are many factors that cause conflict and some of them are not connected to work. It may well be as a result of something outside of work which is upsetting people or as a result of previous conflict that wasn't previously resolved. What is said to you may well seem true to the individual talking to you but it may not be the reality of what actually happened so make sure you ask questions to dig deep and find out why the conflict occurred. A good technique is to replace assumptions with facts, people often assume they know the intentions of others, you can not make decisions based on assumptions find out the facts so you can resolve the conflict.

I is for Identify

F is for Flow

If you want to effectively resolve conflict then as a leader you need to be able to control the flow of the conversation. By flow I mean the leader needs to keep people on track towards resolution, the most common reactions that people have when faced with conflict is to avoid conflict and parented it doesn't exist or to turn it into a contest, one in which they have to win neither approach is effective to create a resolution that lasts. Conflict is resolved when people work together and if that is easy leaders wouldn't need to exist but they do because conflict is difficult. The leader needs to make sure that parties know what is the resolution you want and what the parties need to do to get there. Allow people to explore the issues without dragging out the issue, highlight the common ground and always ensure people show respect towards each other.

E is for Execution

Theory is not worth anything unless it can produce a tangible result. The final thing to remember about conflict is that the leader needs to execute a resolution, a good resolution doesn't mean everyone gets what they want, a good resolution in the workplace is when parties can walk away knowing that the conflict doesn't need to revisited and the focus is on the job. The last thing you need is people telling you that the conflict is over then they walk away and start moaning to people about it or end up not talking to the other person's in the conflict. Leaders resolve conflict, they don't bury it, buried conflict grows anger and eventually arises again and causes more disruption than previously. To make sure conflict is truly resolved always follow up with the parties later on just to make sure everyone has moved on.

"Peace is not the absence of conflict, it is the ability to handle conflict by peaceful means" - Ronald Reagan

Mark Wager has designed a new How To Manage Conflict workshop that is available for all organisations to run in-house. 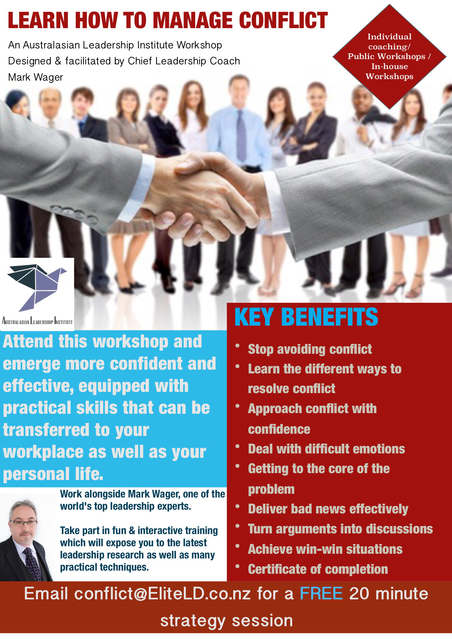