Understanding "Haters" in the Workplace 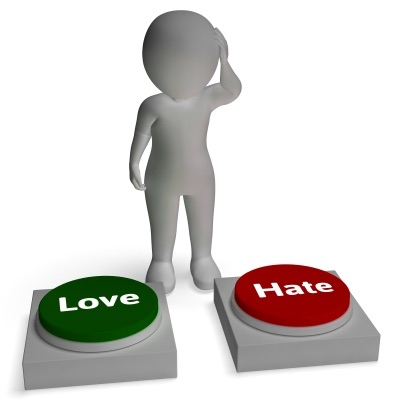 Recently, I delivered a workshop on dealing with conflict within the workplace. At the workshop someone asked me my opinion on a situation they faced at work. It seemed that they had a member of the team who was constantly getting involved in conflict and was very difficult to communicate with and was almost obstructive when it came to resolving conflict. It had reached the stage that their constant negativity was severely impacting the team. She felt she was a “hater’ and wanted to know what to do. This article summarises my response.
First of all, you need to understand how a “hater,” for want of a better word, is formed. I say it that way as the person who is being described as a “hater” would never see themselves as such and would be offended by such a statement. To them their actions are a justified response to perceived injustice and not hate. To understand how this type of behaviour forms, you need to understand the fundamental needs that each and every one of us have as a human being.
As human beings we crave certain things which are essential for us to exist. The most fundamental need is sustenance, the need for food and drink. Without this we will cease to exist so it’s not surprising that the threat of not having this need met can result in some behaviour that is out of character. In extreme circumstances people will beg and steal for food.
The second fundamental need is for love. As human beings we are pack animals that desire connections. You see people travel around the world and while in a foreign land they hear a local accent, what happens? Suddenly connections are formed with people that if they met back home they would have just walked by each other. We desire a sense of belonging and nothing gives you a sense of belonging more than love. Anyone who has ever been in a serious relationship could fill this whole article with examples of people demonstrating behaviour out of character when that need for love is at risk of being taken away. There’s a reason why Paloma Faith sings "Only love can hurt like this".
The third essential human need is for significance. People need to feel valued they need to feel that there is a purpose for their existence. If this essential need is taken away or is at risk of being taken away then like the other needs, it’s not surprising that people react in ways that fall outside what we consider normal behaviour. We crave significance and when we lack it we subconsciously strive to have it in the same way that we crave food when we are hungry. We can’t think of anything but food. It’s our mind's defence mechanism, a version of waving a warning flag. An understanding of this need can help immensely in achieving success in life but I will explore that in more detail in other articles. Today I will focus on the workplace and it’s the modern workplace that’s the issue. So often today we link our significance in life to our careers. When people go to a party or meet for the first time, one of the first questions they ask is “what do you do?” We believe that their job tells us a lot about who they are as a person so we allow the answer to influence how we interact with them. Our careers are important but they shouldn’t define who we are and our need for significance shouldn’t only come from the workplace because when it does then we start encountering problems.
I’ve heard these "haters" described as CAVE dwellers. Constantly Against Virtually Everything. I’ve always thought that cave dwellers is a good description as they are people who are living in darkness. When people have a poor level of self awareness they fail to understand that their perceived lack of significance in their lives can lead to poor behaviour, some of which could be descried as hurtful or even hateful. Matters are made worse because the lack of self awareness leads to a self justification of the same behaviour which encourages the behaviour to continue. Although not always but often the cave dwellers are middle aged, in my experience, forty plus in men and fifty plus in women, who have not achieved what they wanted in life. It is common for them to have a break up of a long-term relationship from which they haven’t fully recovered. Like every other need their subconscious is striving for significance and if they don’t know where to find it then they grab it wherever they find it like the starving person stealing bread. Suddenly areas of conflict become a free buffet for these people, it soon evolves from a dispute into something much more, a cause. In their mind they have suddenly become the hero of their own story battling against the odds. The conflict they are more attracted to is against organisations or people in authority. When dealing with these people you hear language that suggests an escalation of the event in their mind. "It's not just about me it’s everyone else I’m concerned about, it's the principle that counts not the money. ” They are unknowingly feeding of the conflict and trying to boost the importance of conflict in their lives. You will hear them trying to involve other people as with any good story it needs to be shared and in this story they are the hero trying to overcome odds, the greater the odds the greater the story. Hence why they are often quick to escalate matters but often slow to engage in resolving them. The conflict fulfils their need and they don’t want that need to go back to being unfulfilled so they do one of three things.

These are all negative behaviours that damage team environments. The third option often manifests itself as diminishing the achievements of others either through direct or indirect criticism. Accusations of favouritism, or luck or finding ways to criticise other aspects of their work are common behaviours.
Trying to deal with these people is difficult because when behaviours are so closely linked to their fundamental view of themselves and their place in the world then it’s almost impossible to establish long term change unless the individual has a willingness to change. The skills required to effectively manage and motivate these people are too cool placated for an article but in the immediate moment the best thing you can do as a Manager is to set down your expectations of behaviour and the consequences of such negative behaviour. In my experience I’ve found that while this can escalate conflict it can often be the only way that the individual sees the need for change. I stress often and not always as I’ve seen people realise the state they are in and ask for help to change not only their work behaviours but their life in general but there are others who don’t want to leave their safety net of significance. Conflict for them has became a security blanket, one which they don’t want to leave behind unaware that until they do, they forever will live life in darkness.

About the Author:
Mark Wager is the leader that other leaders go to when they need advice. As a Leadership Coach Mark has helped many leaders at all levels develop their skills. To book a session with Mark use the enquiry form below.