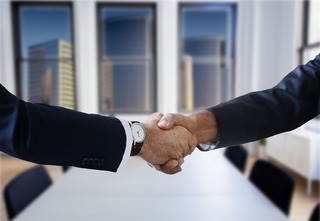 Now more than ever before, the margin between success and failure can be minuscule. Whether or not your business survives may be down to a client or a supplier agreeing to more favourable terms. Hearing  “yes” is one of the most pleasant words an entrepreneur can hear but in the current economic climate where everyone is fighting for business, what can you do to make that difference? The key is being a good negotiator.

If you want to be successful in business or in your career, then you need to know how to negotiate. Whether you are trying to negotiate a deal with a supplier or wanting to get a pay rise, you need to know how to ask people in a way that makes them more likely to say yes to what you want. While this is a detailed and complex topic, in this week’s article, I want to share some practical tips with you on how you can get a better deal for yourself.

Tip One: Negotiation is episodic

“You must never try to make all the money that’s in a deal. Let the other fellow make some money too, because if you have a reputation for always making all the money, you won’t have many deals.” – J. Paul Getty

The biggest factor in determining if your negotiation is successful is how happy people were with your previous dealings. Successful negotiations are never a one-off scenario, it’s all about relationships and effective relationships especially in businesses which are built over time. So when negotiating don’t just think about the deal in front of you always remember what deals are coming later down the road.

I remember a story about a Sales Manager I knew who imported products to sell to his customers and because he believed he was the only person who had this product he put on an incredibly high mark-up and sold the product for ten times the price he bought it for. Although it was a ridiculous mark-up price, he sold a lot of this product. A year later someone else also got a hold of this product and sold the same for what was considered to be a fair price which was much lower at about a third of the price.  Customers switched business to the new supplier and when the Sales Manager  approached them saying he would match or even lower the price below this competitor, he found that his former customers didn’t want anything to do with him. The reason is because people will forgive you for making a mistake but they won’t forgive you for taking advantage of them.

Tip Two: Focus on giving rather than taking

“Place a higher priority on discovering what a win looks like for the other person.” – Harvey Robbins

If you are not familiar with the theory of the law of reciprocity then you have certainly encountered it many times even if you weren't aware of it. The law of reciprocity says that people have a tendency  to give back to people the nature of treatment that they have received from them. If you treat someone kindly they are more likely to return that kindness. Research has shown that this law actually influences people's decision making. In one experiment by Professor Dennis Reagan at Cornell University they studied how many people bought raffle tickets from a stranger. In one scenario the stranger just asked if the person wanted to buy a raffle ticket and in the other the stranger went away and gave the person a soft drink. The people who received the soda bought twice as many raffle tickets than the people who didn't receive the soft drink. In a negotiation remember if you want someone to give you something or do something then find a way to give them something in return or do something for them so instead of asking for what you can receive from them ask yourself what value can be returned and offer this to them.

‘Let us never negotiate out of fear. But let us never fear to negotiate.” – John F. Kennedy

The art of negotiation is about knowing when the time is right to negotiate and particularly when the balance of power between you and the person you are negotiating with is in your favour. By this I mean when is the time when they need you more than you need them, this is when your negotiating power is strongest.

Here’s an example of a common mistake I hear from people I’ve coached. An employee accepted a new role and was  very happy to take it on even with the additional duties without discussing  important issues such as salary or what resources were available to do the job. They then decided to negotiate these factors much later on and after the contract was already signed. After finding out that the job actually had more work than anticipated and this was never discussed it became a struggle to get what was believed to be what was deserved and considered fair. However, because it was already agreed it was too late to negotiate. The right time to negotiate is before rather than after signing the contract. This is when the negotiating power is at its strongest and when it is possible to get the highest and best results.

Tip Four: It’s not about what you want

“Diplomacy is the art of letting someone else have your way.” – Sir David Frost

This is about letting the other person believe you want it more than them so it becomes even more attractive to them than it actually is. One of the most common mistakes I see people make when negotiating is when they are so eager for something that they settle for far less than what the other person was prepared to offer. This happens a lot when people start a job that they really want. They are so exited that they settle for anything that’s offered.  I’ve even seen people accept a job without even knowing what the salary package is. It’s because they focus on what’s important for them and they never care to find out about how important this deal is for the other person.

I learnt this lesson many years ago, when I finished school and I worked in a shoe shop and one day in the middle of a very cold winter in London a customer  walked into our shop and asked for some sandals. They were going on holiday to get away from the cold weather but he couldn’t find sandals anywhere as they were out of season. I went out the back and to my surprise I found one pair. At that moment an experienced sales person asked me how much I was going to sell the sandals for. My first impression was that the sandals where useless to us so I was going to give them away for a few pounds. However, the experienced sales person told me that the value is determined by how important the deal is for the other person. He was desperate for the sandals so was willing to pay a lot more money for them. The fact that they weren’t important to  me was irrelevant. Always put yourself in the position of the other person and see the trade from their position.

Tip Five: “No” is not the end of the negotiation - it’s the start

“The most important trip you may take in life is meeting people half way.” – Henry Boyle

People don’t like hearing the word “no.” It feels final, it’s the end of the conversation but actually in fact it’s just the beginning. This lesson is one of the main differences between people who are successful and people who fail. If  you want to be a better negotiator then you need to view “no” as just the beginning of the conversation. When you hear the word “no” this is a clear sign that you haven’t to this point asked the right questions. You know what the other person doesn’t want but do you know what they do want and why? It’s the “what” and “why” questions that will turn the no into a yes. Let me explain the difference.

Here’s a story I was told when I trained to become a mediator. A mother has two children who are arguing over the last orange in the house. A simple approach would be to split the orange into two and give each child half of the orange. This would be a compromise but in negation, compromise is not always the best solution. The Mother takes the orange from the crying children and asks  why they want it. When asked, one child expresses the desire to make orange juice. The other is baking muffins and needs to shave the peel into the recipe. The children, with the help of their mother, both win. Allowing one child to make all the juice he or she wants and then  giving the leftover peel to the other after  every drop of juice has been squeezed out of it. So one gets the entire juice and  the other gets the entire peel intact so both are therefore winners and satisfied all because their mother asked what they wanted it for and why they wanted it.

To be successful in business or life you need to be able to negotiate and while it’s a skill it is very complex but at its very core lies a simplicity. It’s  about relationships. Successful negotiations are built on successful relationships. Find a way to look beyond your wants and needs and see the deal from other people’s viewpoint and solutions will present themselves.