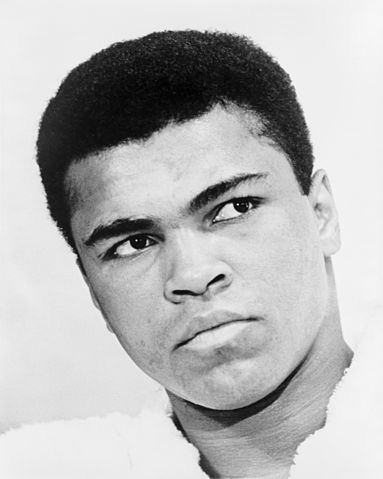 One of the most inspirational sporting events happened forty years ago, the famous "Rumble in the Jungle" event was held in Kinshasa, Zaire, May 1974. At the event the Heavyweight Boxing Champion of the world George Foreman put his title on the line against the underdog Muhammad Ali. It's strange to think now that Muhammad Ali was an underdog but at the time George Forman was not only the younger champion but was also undefeated. Foreman had also beaten the only men at the time who had defeated Ali, Joe Fraizer and Ken Norton both in dominate fashion. Muhammad Ali beat Foreman and regained the Heavyweight title in what many people call the fight of the century. It was around this time that Ali become more than a boxer, he turned into an inspirational legend. Here are a few of his most memorable and inspirational quotes

"He who is not courageous enough to take risks will accomplish nothing in life."

"I am the greatest, I said that even before I knew I was."

"If they can make penicillin out of mouldy bread, they can sure make something out of you."

"I figured that if I said it enough, I would convince the world that I really was the greatest."

"I know where I'm going and I know the truth, and I don't have to be what you want me to be. I'm free to be what I want."

"It's lack of faith that makes people afraid of meeting challenges, and I believed in myself."

"If you even dream of beating me you'd better wake up and apologize."

"It isn't the mountains ahead to climb that wear you out; it's the pebble in your shoe."

"It's not bragging if you can back it up."

"I never thought of losing, but now that it' s happened, the only thing is to do it right. That's my obligation to all the people who believe in me. We all have to take defeats in life." -

"A rooster crows only when it sees the light. Put him in the dark and he'll never crow. I have seen the light and I'm crowing."

"At home I am a nice guy: but I don't want the world to know. Humble people, I've found, don't get very far."

"The fight is won or lost far away from witnesses - behind the lines, in the gym, and out there on the road, long before I dance under those lights."

"What keeps me going is goals."

"There are no pleasures in a fight but some of my fights have been a pleasure to win."

"The man who has no imagination has no wings."

"Silence is golden when you can't think of a good answer."

"I'm so fast that last night I turned off the light switch in my hotel room and was in bed before the room was dark."
"I hated every minute of training, but I said, don't quit. Suffer now and live the rest of your life as a champion"

"It's the repetition of affirmations that leads to belief and once that belief becomes a deep conviction, things begin to happen"

"Age is whatever you think it is. You are as old as you think you are"

"Old age is just a record of one's whole life"

Now it's your turn to be an inspirational leader

Mark Wager is the leader that other leaders go to for advice. To become a leader is easy, to become an inspirational leader is difficult but the skills required to motivate and engage people can be learned. Mark specialises in customised in-house training as well as leadership mentoring. Contact Mark if you want to learn how to become the person that you always wanted to be .