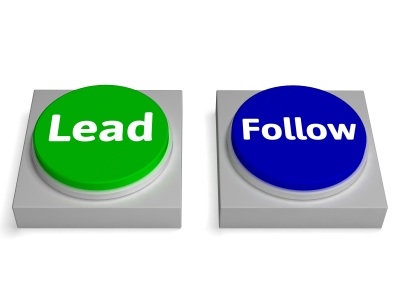 Recently I was delivering training to a group of emerging leaders and the topic of I was asked to talk about was getting people to do what you want them to do. After I had introduced myself and explained about my background I asked everyone to stand up, which they did. I then asked everyone to put their hands in the air, again they followed my instructions. I then asked everyone to wave their arms around, which they did. I then asked everyone to make a “moo” sound like a cow, the audience had a few curious looks and most but not all mooed. I then gave my final instruction. “Now jump out of the window.” I’m glad to report that no one decided to jump out of the window. Everyone sat down and I explained that we had just demonstrated the fundamentals of how leaders guide people. People follow leaders for different reasons and the key to become an elite leader is to understand what those reasons are and this article is going to give you an overview on why people follow.

A leader is nothing without followers. I recall a quote by Nolan Bushnell, the founder of Atari who said ‘Everyone who’s ever taken a shower has an idea, it’s the person who gets out of the shower, dries off and does something about it who makes a difference” When I read that quote I’m reminded that we all have ideas we all have a message but without that spark of leadership skill we will always be voices in the dark. We need people to believe in us and share our passion. We need followers.

People follow leaders either out of respect or because of the perceived consequences. Let me explain those two reasons in more detail. Let’s start with respect.

After I had asked the group of emerging leaders to stand u, wave their arms in the air, moo like a cow and jump out of the window, which fortunately they didn’t carry out the last instruction, I asked them to reflect on why they followed me and at what stage they decided not to follow and really think about why. The most common reason for why people follow a leader is out of respect and that respect comes from three different areas. The leader's position, their knowledge or their personality.

If you respect a person’s position then you are likely to follow them. As an illustration the business world is full of Managers who are giving people instructions everyday yet very few of those managers are what you would describe as quality leaders. If people respect the position then they are motivated to follow. Whenever I speak to people who are about to start a new managerial role they all seem to share a secret fear usually on their first day. They will ask people to do something and everyone will refuse and they will fail. So what is the next step? It’s a natural fear and one I shared when I started my journey. I was nineteen when I became a Manager and was a kid who didn’t know much about life apart from the fact that I wanted to make a difference. The team I had were on average around twenty years older than me. I could only imagine what they must have thought when they were told that their new manager was young enough to be their son. As my first day progressed I realised that despite their apprehension of having someone so young as their Manager I was still their Manager and while I hadn’t fully won their respect they still respected my position and followed me.

When the group of emerging leaders discussed the reason why they followed my instructions they mentioned that after I had spent time explaining my history as a leader and my background they considered me an expert on leadership so when I asked them to do something they had confidence in what I was asking them to do and naturally followed. Think about the time you visited a doctor or a lawyer who would have given you advice. In the majority of cases you would have followed their advice without question. They had expert knowledge, so high a knowledge that you actually have to pay them in order for them to share that knowledge. Having people respect the position or the knowledge of the leader is very effective but not as effective as the ability to influence people which leads me to the third but in my opinion the most important factor.

A leader’s main ability to influence comes when people respect them as a person. If the leader has personal qualities that are admired and people want to obtain those same qualities then regardless of what your position is then you will be a leader. When I train leaders I ask them to talk about someone who inspires them. It may be someone they have met or just someone they admire from afar and I ask them to list the reasons why they consider them a leader. The names of the leaders change and the people who I train come from different walks of life, different nationalities, different professions but ultimately the list of leadership qualities stay the same. Integrity, courage, passion, honesty, confidence, trustworthy, humble and the list goes on all of the top items that people associate with a quality leader are personal qualities. For prospective leaders this offers good news and bad news. Firstly the good news is that this demonstrates that you don’t need a title to be a leader, you need a title to be a manager. Here is the bad news. These qualities are difficult to learn. You can’t attend a one day workshop and suddenly be a person with a high level of integrity and honesty. Even the best leadership training can’t overwrite a lifetime of influences in one day. If you want to lead people you need to lead yourself before anyone else.

The second fundamental reason why people follow is because of their perception of the consequences. The best way to think about it is what impact is the decision to follow going to have on how I value myself. The question of value breaks down into two categories positive and negative.

If you ask people to do something they are going to enjoy or find pleasurable it’s a no brainer that they are going to follow. On a more complex level of value people look beyond immediate pleasure to what benefits them from following? I tell people the key to forming a highly motivated team is to align each team member’s individual ambition to the team’s overall goal. People will work to benefit other people but they will sweat blood and tears to benefit themselves. It sounds simple because it is. Make people happy make people want to work, make them want to achieve and you will have a team that far exceeds anything you thought possible.

Negative
On the opposite scale of value people will follow if they believe there may be a negative consequence if they don’t. Around the world there are Managers in offices who don’t possess leadership qualities but are getting people to follow just because they stress the negative consequences if they don’t. This is an easy method and quite effective in the short term but in the long term it never builds loyalty nor the type of commitment that an effective team needs. Now this is not to say that negative consequences play no role in modern business. A lot of the time I work with managers who are struggling in teams because they have never explained the consequences of not following "They don’t do what I say – what can I do?” This is especially difficult if the Manager believes that their team doesn’t share the same values and work ethic that they do. A common source of stress in managers. This boils down to a lack of managerial courage. Something which is difficult for people to admit to. I asked my training team if they went around in the morning and physically forced people to attend work, whether they drove a van street to street breaking into people’s houses carrying them out of bed and drove them to work? Of course they didn’t. People attend work because they are aware of the consequences. Go to work and get paid, don’t go and eventually you don’t get paid. It’s not the responsibility of the Manager to fire people. They are there to explain the expectations and the consequences of not meeting those expectations. It is then the decision of the staff member as to what they decide to do.

Let’s not end on a negative note. If you want to become a leader be aware of why people follow. – It is because of their perception of the consequences, either positive or negative or it’s because of the respect they have for you as a person, as an expert of your position. While all effective in different ways if you want to aim for that next level of quality leadership focus on gaining respect as a person and discovering what positive value you can give each and every member of your team.

Finally never forget that Leadership is not a title. It is an attitude. Be a good person and inspire the same in others. Achieve this and people will follow.