Getting rid of the vampires in your life 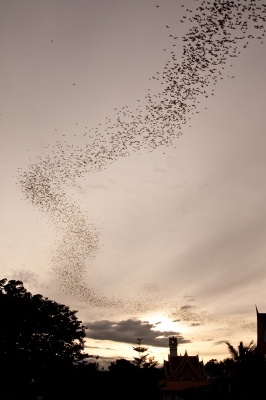 Getting rid of the vampires in your life.

The vampire is one of the most iconic images in history from. Bram Stoker’s 1897 novel “Dracula” through to Nosferatu leading up to Anne Rice’s and Stephanie Meyers’ modern day interpretations. The visual image of the vampire has changed during the years but the consistent characteristic has remained; the vampires need to suck the blood from the living and make them undead, a vampire like themselves.

The vampire has been used as an analogy for many things throughout literature, whether it’s a symbol of guilt, a repressed sexual need or an expression of the wealthy feeding of the poor, the story of the vampire can be a powerful expression. This made me consider just how many of us have vampires in our lives and how we could get rid of them.

There are people in this world who look and talk like us but they are different. These people have unfulfilled lives. Where there should be self-love there are gaps. Where there should be light there is only darkness and they believe the only way to relieve this darkness is to take the light away from other people’s lives. When they see happiness in other people they don't use it as an incentive to what they themselves could achieve but instead they wish to feed of this light. These people are simply modern day vampires and you need them out of your life.

What makes a vampire?

They started off like everyone else and like most people they looked at their lives and didn’t like what they saw. Not uncommon but most of us have been there and what makes these vampires different is, when they saw themselves in the mirror, an unfulfilled life, and did not like what they saw, the blame for this life was transferred to everyone else but themselves. They blamed circumstances, they blamed their boss, their partners and, other people but never themselves. This thinking results in failure to take full responsibility for the state of their own lives, their career and their happiness. They will never ever resolve their issues and will never ever live their life to its full potential. They are not fully alive, they only appear alive. They continue to reinforce this shadow of a life by believing that anyone who achieves success only does so because of luck or chance so they consciously make a decision to put down that person’s achievements, they feed off their energy, their success with the sole aim to make the successful person as lifeless as themselves.

How do you spot a vampire?

Don’t be fooled and think that the vampires in your life are obvious. The ones that are obvious are likely not in your life and you are keeping them at a distance. The dangerous ones are the ones who may be close to you. They are nice and bubbly and may smile when you share good news but it’s in these moments of sharing that you see the difference. They will immediately respond by either covertly diminishing your achievements by saying “you are so lucky” or “how on earth did you do that?” Deep down the resentment is building and so is the desire to suck the energy out of you. Another sign is that they will talk about a personal achievement of theirs which is not related to your topic.

Why get rid of the vampires?
It can come across as a heartless decision to cut or distance people out of your life but remember just how much of an influence the immediate circle of friends have on you. I’ve heard it said that you as a person are the average of your five closest friends. Looking around and I think this is accurate, we attract like-minded people into our inner circle and they influence us greatly. Despite how complex we are as individuals fundamentally we repeat behaviours that receive positive reinforcement and we stop behaviours for which we receive negative reinforcement. We haven’t changed that much since we were babies. A baby cries and as a result receives attention, because they receive attention the behaviour is reinforced and so next time they want attention what do they do? They cry. When the baby's cries are not responded to the baby stops crying, the behaviour was met with negative reinforcement so it stops and replaces this with a different behaviour. We need to surround ourselves with people who will reinforce the positive behaviours in our lives. If we don’t we will never grow.

How to get rid of the vampires

Cutting people out of your life can be as brutal as pushing a stake through a heart. To be honest this is something that I personally delayed doing for a long time. I kept a circle of friends who in hindsight never provided a positive environment yet I thought “it’s just them” “They don’t mean anything by it” and maybe they were completely unaware of the negative impact they had on me and it wasn’t until I heard someone say “why do you allow these people in your life?” Until then as strange as it sounds I never realised that how people treated me and my happiness was my responsibility. It was at this stage I made the difficult decision to rid the vampires out of my life.

If cutting people out of your life seems a step too far for you then like in the movies try to get rid of the vampires with light. Make a conscious effort to influence your friends more than they influence you and show them the way with the light in your life. Be ultra positive and be positive about the behaviours they demonstrate that you want to see repeated. These vampires exist because of gaps in their self-esteem. A lack of acceptance of who they are. Shower them with positivity and allow them to accept themselves and encourage them to take responsibility for their lives and their own happiness. Do this and maybe you will get rid of the vampires in your life and those who remain will be your true circle of friends.