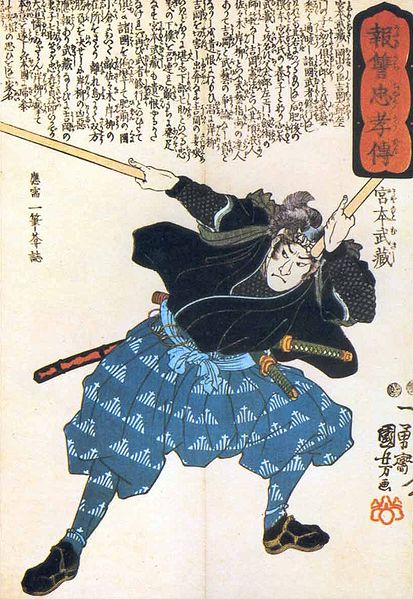 Miyamoto Musashi, born in 1584 in Harima province Japan, is widely regarding as one of the greatest warriors in history. Miyamoto was a Ronin, a masterless samurai who travelled across Japan to find the greatest warriors in their discipline in order to fight them in a duel. Legends have it that Miyamoto Musashi fought and won his first duel at the age of thirteen and would go on to fight over sixty duels, undefeated in his lifetime.

During his later years Miyamoto Musashi would go on to write a book entitled “The Book of Five Rings” in which he takes a philosophical approach to fighting. While this may not seem like the most likely source of inspiration never forget that each of us at some time are fighting something whether it be a person, an obstacle or even ourselves we are always facing something that we have to overcome. So take a few minutes to read some quotes from the greatest fighter of all time.

“Think lightly of yourself and deeply of the world”

"Do nothing that is of no use"

“Get beyond love and grief: exist for the good of Man.”

“Perceive that which cannot be seen with the eye.”

“If you wish to control others you must first control yourself”

“You can only fight the way you practice”

“Do not regret what you have done”

“If you do not control the enemy, the enemy will control you"

“Do not sleep under a roof. Carry no money or food. Go alone to places frightening to the common brand of men. Become a criminal of purpose. Be put in jail, and extricate yourself by your own wisdom.”

“Whatever the Way, the master of strategy does not appear fast….Of course, slowness is bad. Really skilful people never get out of time, and are always deliberate, and never appear busy.”

“All man are the same except for their belief in their own selves, regardless of what others may think of them”

“Respect Buddha and the gods without counting on their help”

“You may abandon your own body but you must preserve your honour.”

“To become the enemy, see yourself as the enemy of the enemy”

“Know your enemy, know his sword.”

“No man is invincible, and therefore no man can fully understand that which would make him invincible”

“When you decide to attack, keep calm and dash in quickly, forestalling the enemy...attack with a feeling of constantly crushing the enemy, from first to last.”

“There is no one way to salvation, whatever the manner in which a man may proceed. All forms and variations are governed by the eternal intelligence of the Universe that enables a man to approach perfection. It may be in the arts of music and painting or it may be in commerce, law, or medicine. It may be in the study of war or the study of peace. Each is as important as any other. Spiritual enlightenment through religious meditation such as Zen or in any other way is as viable and functional as any "Way."... A person should study as they see fit.”

“Never stray from the Way.”

“When in a fight to the death, one wants to employ all one's weapons to the utmost. I must say that to die with one's sword still sheathed is most regrettable.”

“Whatever the Way, the master of strategy does not appear fast.”

“It is said the warrior's is the twofold Way of pen and sword, and he should have a taste for both Ways. Even if a man has no natural ability he can be a warrior by sticking assiduously to both divisions of the Way.”

“When your spirit is not in the least clouded, when the clouds of bewilderment clear away, there is the true void.”

Miyamoto Mushashi left us many lessons but the main lesson that I've learnt from Mushashi's legacy is that despite how much the world has changed dramatically over the past 400 years the fundamentals of what makes successful hasn't. At the core of anyone who is truly successful is self mastery, Mushashi showed us that the path toward success starts within and it's only when we've achieved mastery over ourselves that we can begin contemplating mastery of something else.

Mark Wager is an international author and one of New Zealand's leading leadership experts. To learn more about leadership contact Mark via the enquiry form below.