What's Holding You Back? By Mark Wager 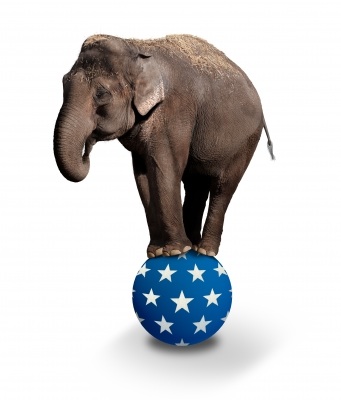 What’s holding you back?

When I was a child I visited the circus. I believe I was around ten years old and I lived in the middle of Birmingham where the only animals I ever saw were cats, dogs and the occasional fox. So the news of the circus coming to town was exciting. I was eager and most excited to see an elephant in real life. I watched the old Tarzan movies in which Tarzan used to ride an elephant around the jungle. On the day the circus arrived I was filled with excitement. The clowns were funny, the lions were scary and the trapeze artists were exciting but I was waiting for the elephants. The time finally came as the elephants were guided out into the circus ring. I noticed that they were much bigger than I expected. They seemed such powerful creatures. As they reached the middle of the circus ring I noticed each elephant had a foot secured to a small stake that stuck to the ground. When I asked my father about this he told me that this was for our protection so that the elephant wouldn’t run away. I looked at him in a curious manner as I thought that the small rope would barely keep me, a ten year old boy in order let alone a giant powerful creature like an elephant. My father saw my quizzical look and explained that at an early age an elephant was tied to a rope so they wouldn’t escape. They tried and tried but they couldn’t move until they just accepted their fate. So then as adults they were programmed to believe that the rope was unbreakable so they wouldn’t attempt break it. I was always in awe of elephants so when I heard this, my excitement turned to sadness and I asked to leave. From memory, I think I said that I had too much popcorn and I was feeling sick but it was something else that bothered with me. Since that day I’ve never visited a circus again.

When I look back now I realise that the elephant was not alone. We may be sharing the same fate? How many of us have the potential to do something more than we are doing yet we are being held back by our own version of the stake in the ground. How many of us are missing out on a better job, a better home or a better life because of something that we have been programmed to believe is able to hold us back. How did we fall into this trap of being mentality conditioned to fail and more importantly how can we escape from our very own circus?

The inner conversations we have every day determines just how much we are bound by our limitations. The elephant was only bound by the rope around its leg because the elephant believed he couldn’t escape. It’s the same with us and our thoughts. Our sub-conscious has difficulty differentiating between actual reality and vivid thoughts. In fact research showed that the neuro-receptors in our brains react in exactly the same way. Now we have numerous inner conversations with ourselves and if you doubt me just ask yourself what you are doing right now. The chances are that you are having an inner conversation about what you think about this article and whether you should continue reading. We talk to ourselves constantly and if those thoughts are negative or even if they are reinforcing the current state then our subconscious treats them as reality and as a result we act in a way that reinforces that reality. As an example if a person has applied for promotion and they tell themselves that they are not going to get the job, because they are not smart enough or don’t have enough experience. They listen to their own inner thoughts and they believe those thoughts. The sub-conscious then acts in a way that reinforces the reality that they are not good enough for that promotion. You can guess what happens at interview. They act nervous and unsure of themselves so what does the panel think? They see someone unsure of themselves and conclude that the person is not experienced or ready for promotion which in itself reinforces the view that the person had of themselves. Therefore the metaphorical rope is tied tighter around their leg. Belief becomes reality. If you don’t believe you will succeed then the reality is you won’t succeed.

How do we break this magic spell? The key is to know which ropes are only keeping you in place because you believe them to be and which ropes are actually your limitations. We all have limitations but far further then we can imagine. I would love to play football for England at the world cup but the reality is that I’m 42 and can barely kick a ball so that particular rope is a clear barrier and no matter how much I believe in myself I’m never going to be good enough to play professional football. Yet there have been many barriers in my life that I have found to be imaginary. At the age of five I was told that I would never be able to talk properly yet today I make a living by going to companies to talk. At the age of 18 I was told that I would never become a Manager in retail yet one year later I was the youngest manager in a company of over 150 Managers nationwide. At the age of 23 I was told a retail manager would never be able to work in a London Finance House, yet within a couple of years not only did I work for a London Finance House but I had become a Broker Sales Manager there. I was told I would never publish a book and not only have I published a book but here I am now receiving emails and tweets from people all around the world who have read my book. I was told I would never have my own business and yet again I proved them wrong. Each and every single one of these barriers were proven to be false. If I believed just one of them then my life would have taken a very different direction and I wouldn’t be where I am now. To be honest there may well be more barriers in my life, more ropes that I haven’t tested. Well I guess I need to find out and I suggest you do the same.

Talk to yourself and be positive. Believe in yourself and test those ropes. Find out which ropes are real and which are only in place because of a misguided belief. Remove all the negative "I can’t do this” type talk from your vocabulary. Never ever put yourself down because believe me there’s plenty of people willing to put you down anyway. Stop blaming everyone else for the shortcomings in your life. Never ever believe that you don't deserve something better. The only thing in life that you deserve is being treated with respect everything else has to be earned. If you don’t earn enough money then it’s because you haven’t earned the right to have a higher paid job. If you are not happy in your life then it's because you are not doing the right things that will bring happiness. The power to change your life is within you. It's the same power that binds which when used correctly can free you to fulfil your potential.

So ask yourself what’s holding you back?